A list of papers can be found at here. The following portfolio is a summary of some of my favourite projects, it is certainly not an exhaustive list. It is split into the following sections for ease. 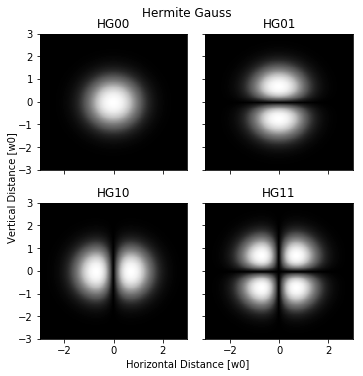 Since lasers are beams of light, very far from the centre of the beam the intensity of the field goes to zero (no light). Previous research tells us that far from any scattering source (air molecules, edges, etc), this intensity must vary smoothly. As a result, only certain spatial patterns of laser are possible, these are called spatial modes and some are shown right. The typical image of a laser (known as the TEM00, HG00 or fundamental mode) is shown top left.

For a given laser, there are unique sets of spatial modes that the laser can support. If there is light present in several of these modes, new patterns can emerge from interference.

Unfortunately, from a given intensity pattern, it is difficult to work out which modes are present. In this project, I am working to improve sensors that can directly read out the modal content of a given laser. 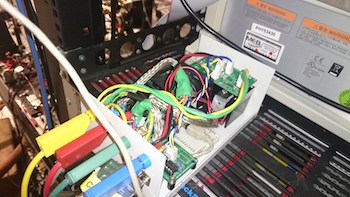 In cold atom instruments such as, atomic interferometers and optical clocks, very stable lasers are used to move electrons in the cold sample of atoms between different atomic energy levels. The frequency of these lasers is stabilized with an optical cavity. As the temperature of this cavity rises, it will expand due to thermal expansion, and so the frequency of light which resonates in this cavity will change, causing the laser to drift away from the resonances in the atoms.

Usually an analogue temperature control system is used, however, very sensitive devices require multiple layers of temperature control. I designed a digital temperature controller using an Arduino and some additional custom electronics. This allowed each layer to communicate, achieving more stable control. An Arduino was chosen because it is a friendly system for future users to work with. Stability of (3 ± 1)mK was obtained for an open system, with breadboard design. 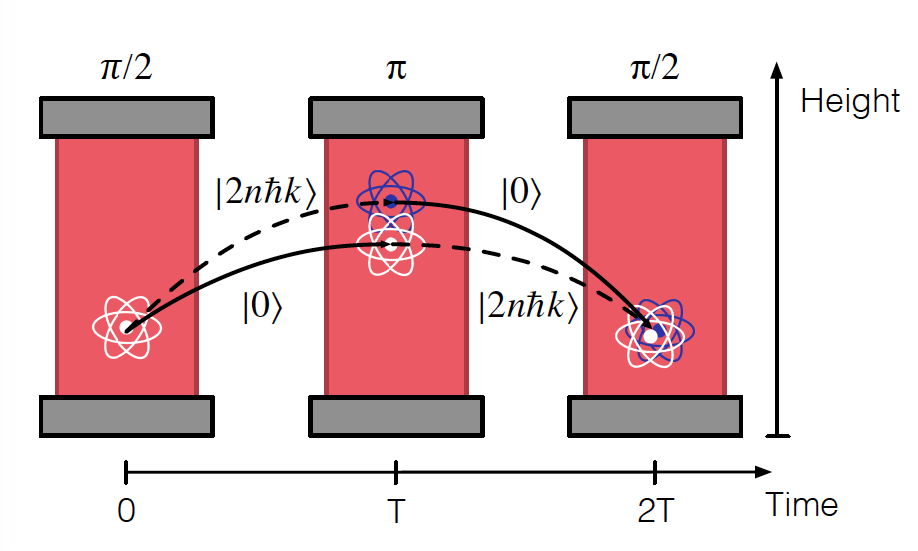 In an Atomic interferometer, a cloud of atoms is prepared in a common electronic state. Lasers are then used to put the atoms in a 50:50 quantum superposition of states. By interfering these states with each other, it is possible to make statements about the fields encountered by the atoms on their paths. Unfortunately, the lasers carry some noise. Optical cavities have been proposed to address some of these noise issues. This could promise significant advances for both gravitational wave detectors and portable atom interferometers.

In this work, I developed a computational model of atoms interacting with a generic time domain laser field. I developed the model for Raman interactions and verified it against known test cases, chose a suitable integration routine and characterized the errors. We found that for reasonable choices of parameters, cavity-assisted Raman interferometry was not viable. We further developed the routine for multi-photon Bragg transitions and explored the limits. The results are published in Physical Review A, ArXiv and Proceedings of Science.

The image right is used under the Creative Commons Attribution 4.0 License. The original content can be found here.

I built the Birmingham Environment for Software Testing (BEST) shortly after my work verifying numerical models for the cavity assisted atom interferometry paper. I found that each time I modified part of the model, to introduce a new feature or speed up the execution time, I would need to re-run lots of detailed simulations to ensure I hadn't introduced a bug. These simulations could take hours and so I wanted to automate the process.

The solution I was looking for was not unlike Continuous integration in software engineering. Unfortunately, unlike software engineering my builds were not fast and my tests were very slow and computationally expensive. I found common tools like Jenkins and GitLab were not suitable for my tests.

I built BEST to alleviate these problems, it can be used standalone or it can hook into GitLabs CI system. It supports grouping of errors by return codes, so you can separate programming errors from numerical/science errors. It supports invoking multiple interacting languages (e.g. C++, Python, Bash) all in one test, so you can have a script (e.g. python) that tests your program (e.g. C) in some large parameter space.

If you are interested in using BEST, or setting up your own server please do let me know.

Note: You will need to accept a self signed certificate.

I developed a Newtonian model of the solar system as part of my undergraduate studies. The aim was to predict the trajectory of a satellite undergoing a gravity assist (e.g. voyager), but the program models all of the gravitational interactions between the planets with an adaptive step size routine written in C++.

I developed a fully encrypted database as part of a course C++ programming. The Fast Light Toolkit (FLTK) was used for a GUI and the Quincy IDE was used for development. 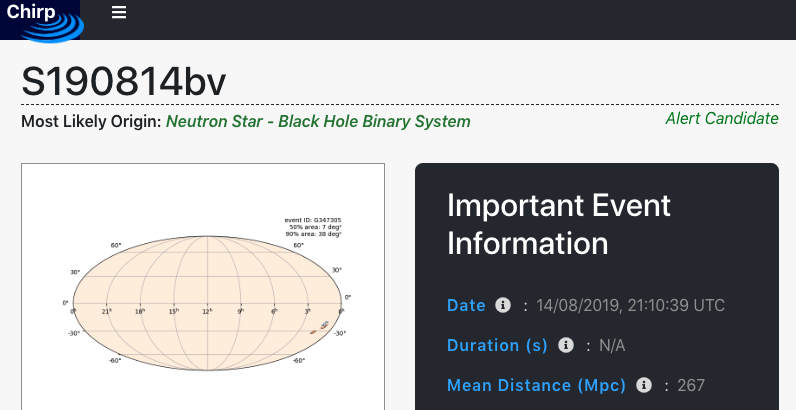 Chrip is a web-app and soon to be released android and iphone app that caches the alerts and displays them in a friendly format. For more information see the about page.

I wrote a python listener script that catches the information in GCN and stores it in a database. I then wrote a simple API to allow JS clients to access the database and load the data. I was responsible for all server side deployment and low latency updates. 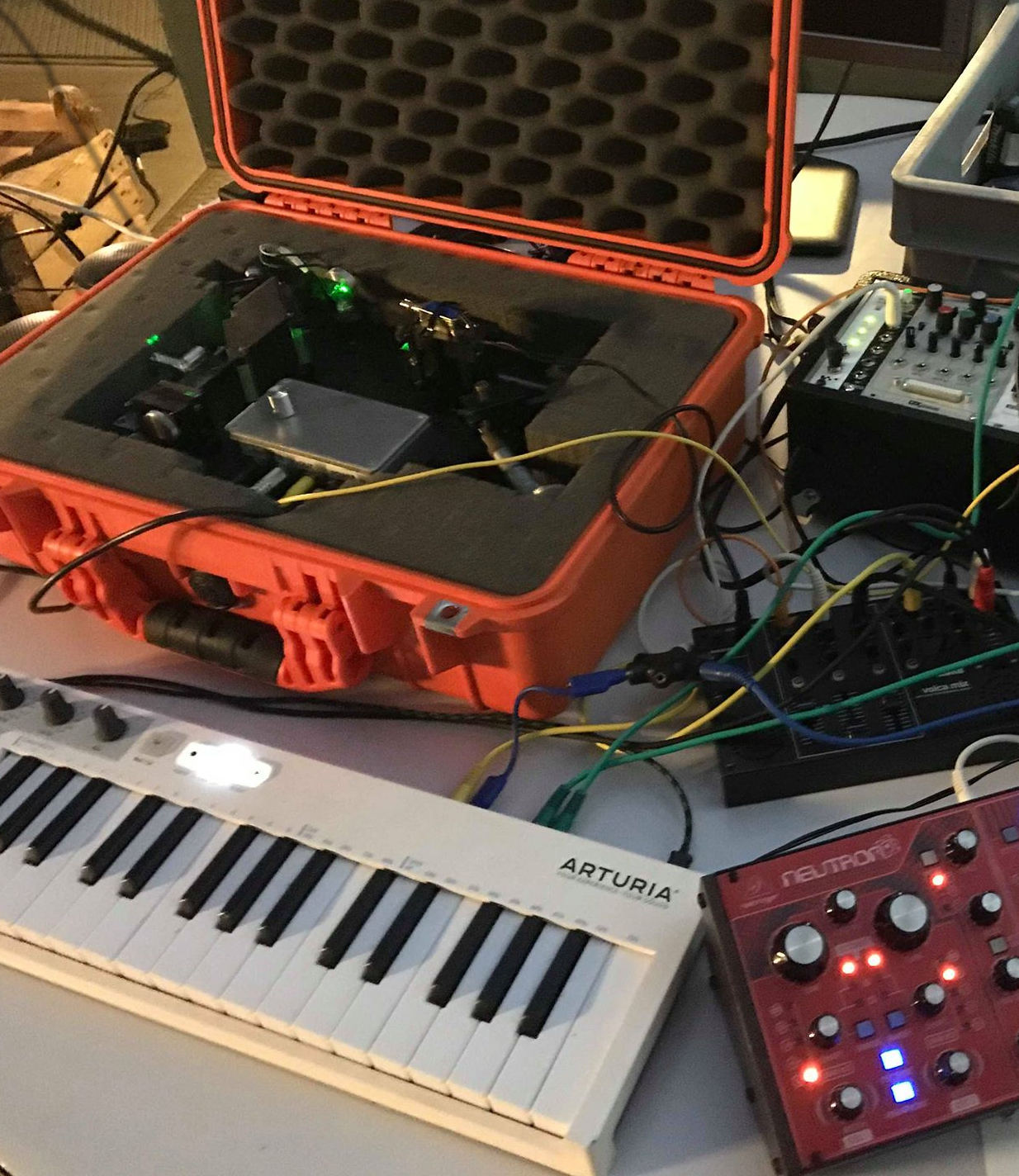 The Gravity Synth is a musical performance that is formed by the fusion of a Miniaturized Gravitational Wave Detector and a modular synthesizer.

The project explores a new way of engaging both artists and the general public. I built a working, portable, robust Michelson Interferometer, that was capable of interfacing with a modular synthesizer. Together with the modular synthesizer, the device is an entirely new musical instrument.

The device provides an immediate source of engagement to artists who can become inspired by Gravitational Waves and can incorporate this into their work.

I have been leading this project for a number of years now, right from the initial build, through the first prototypes to the final build. I give regular talks about the project to artists, scientists and the general public. 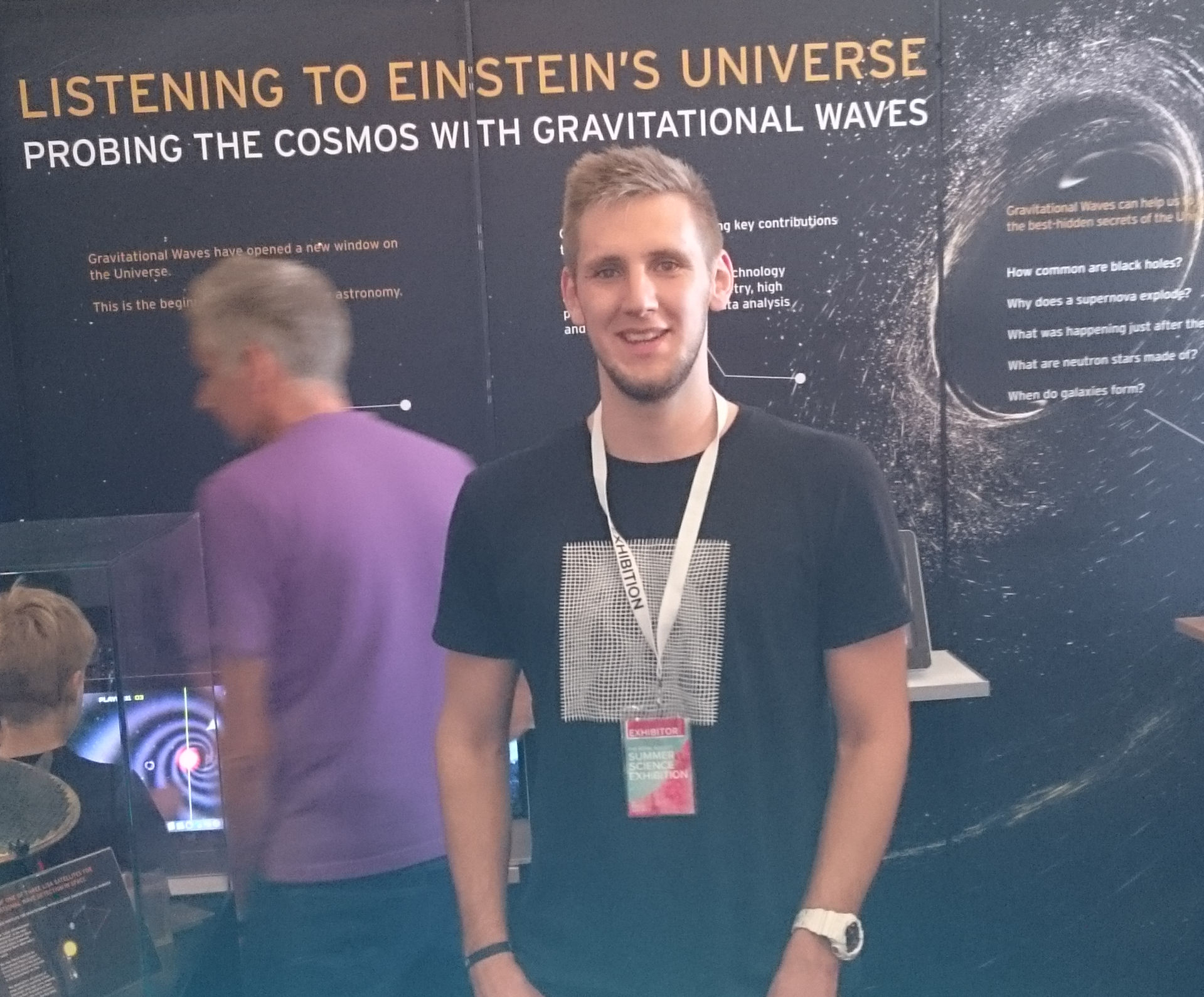 The Royal Society Summer Science Exhibition is a week-long public engagement event held at the Royal Societies London headquarters. I joined as part of the Birmingham group, alongside a number of other UK universities working in Gravitational wave research. Considered by some to be the premier public engagement event, attended by media, politicians as well as the general public.

The Birmingham group presented a large interactive tabletop Michelson interferometer . The interferometer was previously part of an exhibit in the Thinktank Futures gallery and needed to be upgraded with a real-time signal readout and large plastic buttons to modulate the length of the arms, mimicking the effect of a Gravitational Wave passing though detector.

There were 4 buttons, each mimicking the effect of a different Gravitational Wave source on the detector. They worked by moving one of the mirrors a small amount to represent a changing space-time interval. The light would then interfere as it does in a gravitational wave detector (e.g. LIGO/Virgo). The interference pattern would be visible (as in the original exhibit), but also read by a photo diode and plotted real time on the screen.

This presented a number of technical challenges, for safety reasons we restricted ourselves to 1mW of light (same as a laser pointer), this was enough to produce a visible pattern. The photo-diode was placed behind the screen with a small pinhole providing light to it. However, after accounting for losses only a few hundred microwatts of power (which is comparable to a bright room) reached the photo-diode and so the signal was noisy.

Alongside two other PhD students, we solved the problem by only allowing certain frequencies of light to pass through and be amplified. Then averaging was applied in software.

I also developed the internal electronics for the button box, reading the signal and relaying over USB. Mounting this into the box with reliable joints that could be fixed away from the lab presented its own set of technical problems.

In the first year of my PhD I co-developed a new second year python module, teaching students how to do simple numerical modeling in a Jupyter notebook. The module is automatically marked. I continued to work as a PGTA for the following two years while the course was in its infancy.

I worked as a PGTA for three years at the University of Birmingham. I marked reports and helped students develop skills to solve the problems they had been set.